The origins of the Masonic Order of High Knights Templars in Ireland are scant in any printed form of historical detail, and consequently this introduction to the web site of The Great Priory of Ireland is confined to a very brief account of what is recorded of its establishment and subsequent development.

Any reader seeking a detailed understanding of the history of the Orders of the Temple will find many volumes of references on the internet, in libraries, and in many other public sources, much of which can be regarded as speculative in content, whilst in some instances serious research may come closer to reality.  This introduction makes no attempt to educate the reader beyond what is known of the Masonic Orders of the Temple in Ireland as contained within our own historical archives.

The first known record of an active body of masonic Knights Templar in Ireland was “The High Knight Templars of Ireland, Kilwinning Lodge”.   In the eighteenth century the degree of “Knight Templar” was conferred both in independent Encampments and in Craft Lodges, there exists a minute containing reference to this degree being conferred on 28th August, 1769.

In 1805, the Early Grand Encampment of Ireland laid claim to the fact that Templar Masonry had “subsisted in the city of Dublin for over a century”.  This claim may attach an element of speculation, but there is evidence that it had at that period subsisted for at least fifty years, and in a parody attributed to Jonathan Swift, D.D., Dean of St. Patrick’s Cathedral, Dublin, a reference would appear to confirm its existence in the year 1724.

The initiation ceremony and the ritual of the High Knight Templar and Malta Degrees reflect aspects of the formation and subsequent history of both original Orders from the time of the capture of Jerusalem by the Christians of the First Crusade in 1099.

The Grand Masters of the Orders of the Temple, in Ireland, are recorded as follows:

Early last century, the Supreme Governing Bodies of the Orders of the Temple and Malta, in England & Wales, Ireland and Scotland, agreed a Concordat whereby the Supreme Governing Body in each country would have absolute power in its own country, but, with the view of promoting friendly intercourse, Delegates from each, appointed triennially by the Grand Master’s Council, would meet every third year (or in additional special occasions) for conference, for the purpose of discussing all matters affecting the welfare of the Orders.   The Concordat also agreed a form of control over the appointment of members to the highest grades, or ranks, within the Orders.  With subsequent revision and amendments, in 1971 and 1977, the Concordat and the prevailing relationship between the three Supreme Governing Bodies remains firmly in vogue.

The Great Priory normally meets on the Wednesday before the first Thursday in the months of March, June, October, and December, at a place and time (normally 2.00 p.m.) to be notified.   The Installation of Officers for the ensuing year is traditionally held during the March conclave in Freemasons’ Hall, Dublin. 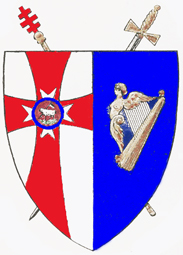