The Grand Royal Arch Chapter of Ireland is the institution which governs the fraternities of Royal Arch Masons and Mark Master Masons in Ireland and Ireland’s districts abroad.

The degrees of Mark Master Mason and Royal Arch Mason are complimentary to membership of the Freemasons and have for centuries been considered an essential though separate part of the Masonic Order.

Throughout the 18th Century, many Masonic Lodge had been conferring degrees of membership beyond those allowed by Grand Lodge. These degrees had spread across the globe along with the spread of the Fraternity in Ireland, by the early 19th Century, it was agreed to allow these extra degrees to continue as separate fraternities, open to Freemasons. 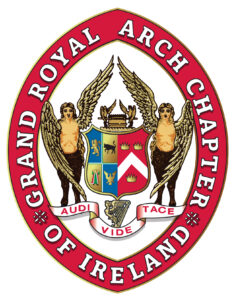